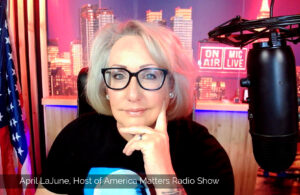 Meet April LaJune, the most censored journalist still on YouTube.

Starting her career in the late 80s as an entertainment reporter, April has interviewed some of the most famous musicians including Bret Michaels of Poison, Neal Schon of Journey and Santana and many others. Her independent newspaper, KC Entertainment became the number one rated independent publication in the Kansas City area as a source for real interviews and reviews of musical acts in the Metropolitan Area.

After being offered a position as the Rock and Metal Music reporter for the Associated Press, April decided to go in another direction with her journalism leading her to work for the ABC News affiliate in Colorado Springs, Colorado. After finding out the News Directors were more propaganda than news, she decided to take her talent to the Lake of the Ozarks where she worked on the morning show beside Kevin Burns, better known as “KB.” She frequently interviewed political figures from Senators to the Missouri Governor asking hard hitting questions.

Soon she was recruited to work at the local newspaper as an editor and then came the tragedy of 9/11 in New York City. This event made her re-evaluate what she was reporting and realized, she wanted to be more independent and caring about the stories and news she was reporting. The work environment of the news was callous and ruthless. This was not what she wanted to do with her career.

Fast forward to 2015 – April was already very involved in politics and as she watched President Trump make his candidate announcement on June 16 she decided to put on her journalism cap once again. Coming back strong, she created her channel on YouTube, quickly gaining 60K subscribers and was heading towards 100K subscriber when the censorship Nazis of Propaganda began unsubscribing viewers at a rate of 1000 per day. After calling out the company for their deep and unfair practices, the powers in charge of YouTube have been allowing her channel to stay at 78K.

Amazingly, after 7 years, many suspensions and warnings, April still has a YouTube channel but has expanded her live broadcast to include Rumble and Twitch where viewers can participate in the Live Chat. Currently, she is the host of the America Matters Radio Show broadcasting Monday through Friday from 2PM – 4PM unless she is traveling to an event where she will be broadcasting on location.

She is currently working on her book called, Deception is a Beautiful Thing: 120 Lies People Actually Believe which is scheduled to be out Spring of 2022.

To watch and engage: