WOW! All signs point to President Trump is still in charge! 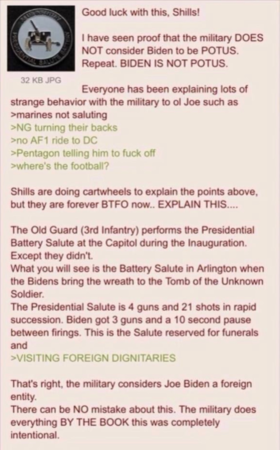 This morning I received a message from an Anon who explained something which is direct evidence the military considers Joe Xi Jingping, a foreign “dignitary.”

I know it sounds crazy but there are several recent events which point directly to this being the case:

and a blaring, brushed over event which also happened on January 20, 2021 right after Biden put his hand on a book and said a few words (as if there was an oath on a Bible <— questionable at that!)

Right after a United States President is sworn into office, the military preforms a ceremony called a 21-gun salute followed by the new President (or continuing POTUS) laying a wreath at the Tomb of the Unknown Soldier in Arlington Cemetery. 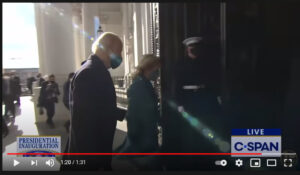 Marines do not salute Biden as he enters White House

You can watch videos of this salute for past Presidents on their inauguration days and see this is the case. There are 4 cannons which shoot rapid fire – 21 shots – 3 seconds apart.

The Military does everything by the book down to the way they place their feet and move their hands. It’s really quite amazing if you watch them.

There was no 21- gun salute and he didn’t lay a wreath at the tomb.

I checked out what this actually means and through the liberal search engine of the Deep State – “Google” – I was able to find this:

This site is just general information about these Military Gun Salutes and what they mean. If you scroll down a bit, you’ll find a link to Wikipedia which explains the differences even further. 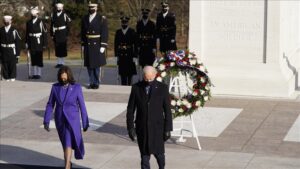 Biden and Harris walk away from wreath after touching it.

So the original poster

The Tomb of the Unknown Soldier is also a very big deal. Laying a wreath in honor of those who died and were never identified – fought and were killed during battle for our freedom – shows respect to them and our country. 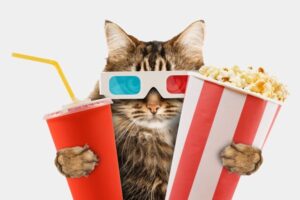 Biden didn’t do this. Instead, he touched the wreath and stepped back. The wreath was not moved to the tomb. It just sat in the middle of the square. If you watch all the other Presidents, they walk up to the wreath, place their hands on it, and walk the wreath over to the tomb with a soldier carrying it for them. It’s routine and done every time – except this time.

You might think these things are simple and not important but in reality, they are extremely significant.

It looks as if the military is in charge and Biden is sitting in a chair – nothing more.

And there’s also a matter of President Trump creating “The Office of the Former President” which directly relates to this post by Q back in October 2017! 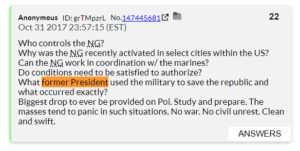