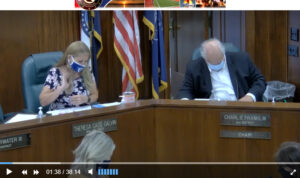 ­The RINOs are so desperate, they’re resorting to personal attacks! That’s when you know you’re winning.

Over the weekend, Theresa Galvin, a current Jackson County Legislator who seems to be spinning out of control, had her attack Social Media person, Jessica Pierce, try posting false statements about me putting her entire campaign in jeopardy since spreading actual slander is worthy of a lawsuit.

Now, just to be clear, I’m not whining. In fact, I’m winning and so are the rest of our Patriot Candidates who believe THE PEOPLE are in charge of this county and country – not the blowhard bureaucrats.

I’m not sure these RINOs understand the people are EXTREMELY MAD and have been looking into just exactly who these “elected” – more like “selected” officials actually are.

I’ve been down this road so many times, the RINOs are playing small ball rather than joining the BIG LEAGUE with us who are willing to ensure the public knows the truth about what these people have been doing their entire time in office which is pretty much lining their own pockets with backroom deals and under the table crony contracts.

And just to be fair with Galvin and Small Ball Jessica, I invited them to come on my show with their grievances and I’ll be more than happy to address the issues with them and then ask them the hardball questions Galvin has tried to avoid by leaving every Q & A session I’ve ever seen her be faced with.

That being said, I think we should be looking at all candidates who are running and find their websites. Let’s take a look at the issues they post and then compare their rhetoric and writing with their voting records if they’re incumbents or their long-time public statements if they’re first-time candidates.

It’s not really hard to see that political puppets like Galvin aren’t on the side of the people. She’s actually working for the GOP establishment which isn’t a good position to be in.

Speaking of not a good position to be in, the rest of the establishment puppets at the local GOP are also carrying water for RINOs who shouldn’t have ever been elected. It’s amazing how these same “die-hard” Republicans lap up the slop from the leadership by acting exactly like Democrats.

Let’s just look at the pattern of behavior we’re seeing.

Attack your opponent with something personal to rile them up because you can’t attack their issues.
Try to spread fake news to hone in your personal attacks
Pretend to be on the side of the people to gain

Now, lets compare what these RINOs are doing to the list of which was written by Garret Geer of Saul Alinsky’s Useful Idiots Plan:

Yes, the RINOs go on personal attacks because we, the real Conservatives and those who want to empower the people are telling the truth. That’s how you know you’re winning – when they’ve got nothing but fake news to push.

Nope – the RINOs are no different than Democrats. But one thing both of these groups give us constantly is more ammo to use against them when we’re trying to show the people the truth about our current situation